What to Know About Quinoa’s Nutrition, Calories, and Benefits 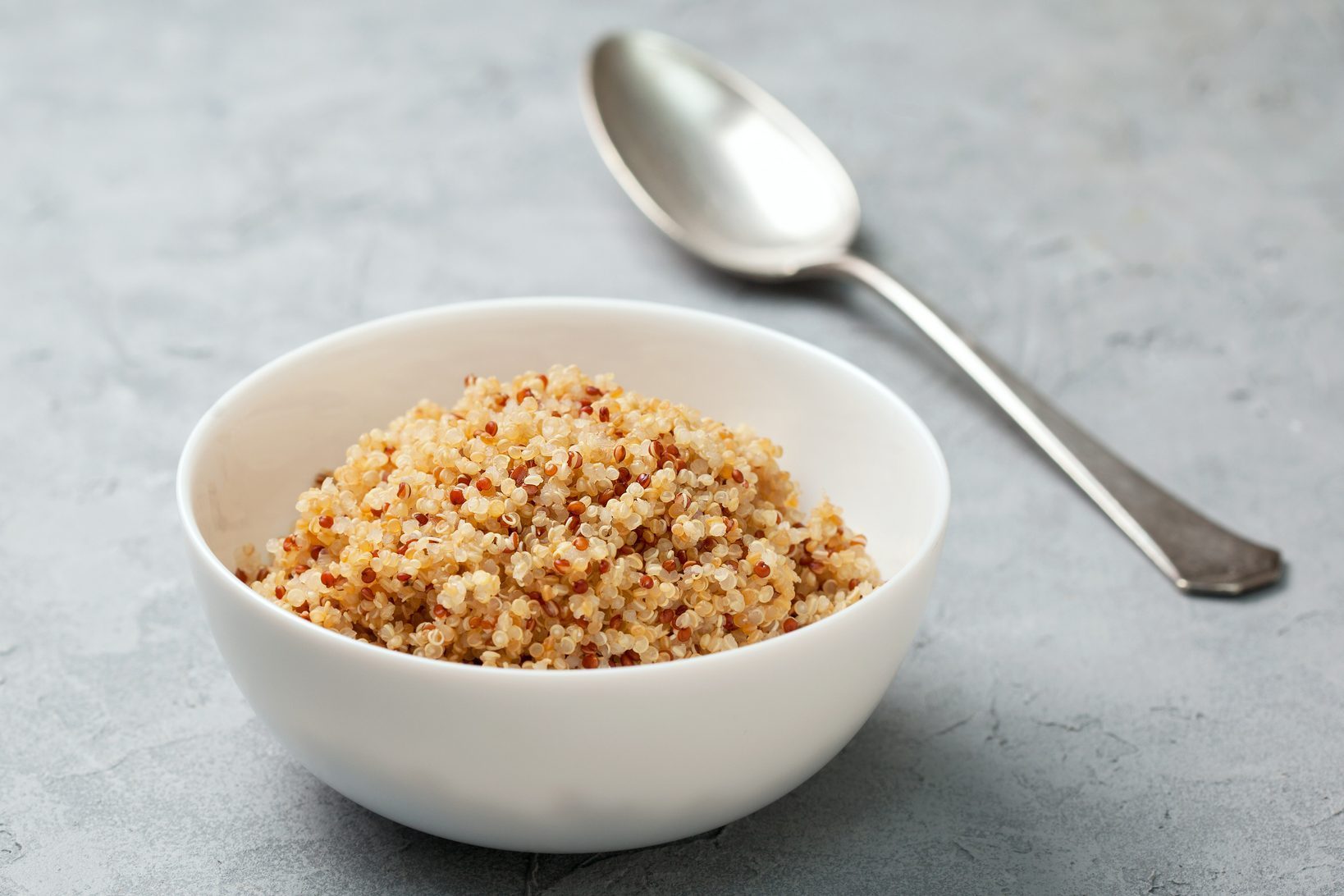 Is quinoa good for you? Learn more about this gluten-free whole grain’s benefits, nutrition, carbs, and calories, as well as how to cook quinoa.

Quinoa (pronounced keen-wah), a once exotic whole grain, has found its way onto mainstream North American menus. The fast-casual chain Panera Bread sells warm grain bowls made with quinoa, and you’ll find it in most supermarkets. Thanks to quinoa’s notable nutrient profile, research-backed benefits, and gluten-free status, its popularity is projected to grow.

Here’s a look at what quinoa is, why it’s a nutritional powerhouse, how it may benefit your health, and healthful ways to incorporate quinoa into your usual eating routine. According to the Oldways Whole Grains Council, quinoa is native to the Andean region of South America. While Peru and Bolivia produce the vast majority of the world’s quinoa, it’s grown in over 50 countries.

Quinoa is in the same plant family as beets, Swiss chard, and spinach, but it’s very different from these veggies. Technically, quinoa is what’s referred to as a pseudo grain, or pseudocereal. These plants are botanically different than cereal grains like oats and rice but treated as members of the whole grain family because they’re so similar, both nutritionally and in their culinary uses.

The United Nations declared 2013 the International Year of Quinoa, in part because of its nutritional value, eco-friendly growing capabilities, and ethical qualities, including increasing the income of lower-income farmers in the Andes. Quinoa has also been praised by NASA as an ideal crop for inclusion in possible future long-term space missions.

(Related: Is Quinoa Healthier Than Rice? Here’s What Experts Say)

You’re probably most familiar with white quinoa, sometimes called ivory quinoa, which is the most common variety. But red and black quinoas are also growing in popularity and availability. They tend to have slightly stronger, earthier flavours and hold their shape well after cooking. Some products combine all three colors.

Other quinoa products are also on the rise, including quinoa flakes, flour, and pasta, as well as packaged foods that incorporate quinoa, such as chips, crackers, cereals, and puffed quinoa snacks.

Quinoa provides a unique combination of nutrient- and fibre-rich carbs, along with plant protein and healthful fat. One cup (185 grams) of cooked quinoa contains the following macro and micronutrients.

May reduce the risk of chronic diseases

In addition to its vitamins and minerals, quinoa contains anti-inflammatory antioxidants, according to a 2017 study, published in Molecular Nutrition & Food Research. This perk may help reduce oxidative stress, an imbalance between the production of cell-damaging free radicals and the body’s ability to counter their harmful effects. For this reason, quinoa consumption may help reduce the risk of chronic diseases, including cancer, heart disease, type 2 diabetes, and obesity.

Heart disease is listed as the leading cause of death by the Centers for Disease Control and Prevention. A 2020 study, published in the journal Phytotherapy Research, looked at the impact of quinoa on cardiovascular health, and the results were encouraging. In the meta-analysis and systematic review, scientists found that supplementing adults’ diets with quinoa reduced body weight, waist measurements, total cholesterol, “bad” low-density lipoprotein (LDL) cholesterol, triglycerides (blood fats), and blood insulin levels.

Another study, published in Current Developments in Nutrition, also assessed the link between quinoa and heart health. Researchers found that compared with a control group that didn’t eat quinoa and those who added 25 grams of dry quinoa per day, overweight and obese subjects who added 50 grams (about 1.7 ounces) of quinoa daily experienced benefits. These included reduced triglyceride levels and a 70 percent reduction in the prevalence of metabolic syndrome. Metabolic syndrome is a cluster of metabolic factors that include all of the following: increased abdominal fat, reduced “good” high-density lipoprotein (HDL) cholesterol, increased triglycerides, elevated fasting blood glucose, and high blood pressure.

Quinoa also has a low glycemic index (GI) of 53 out of 100. A food’s GI indicates how fast blood sugar rises after you consume a carbohydrate-containing food. Quinoa’s ability to help regulate blood sugar is one reason why it’s often recommended for people with diabetes or prediabetes.

A 2017 study, published in Nutrición Hospitalaria, randomly assigned people with prediabetes to consume either quinoa or a placebo (maltodextrin). After 28 days, the quinoa group had experienced reductions in body mass index (BMI), fasting blood glucose, and A1C levels. The latter is a measure of how well-controlled blood sugar has been managed over the previous three-month period. Quinoa eaters also noted improvements in fullness and satiety.

Because quinoa is naturally gluten-free, it can be used as a nutrient and fibre-rich source of complex carbohydrates for people with celiac disease, who must avoid gluten. It’s also a good option for people with non-celiac gluten sensitivity. The National Celiac Association recommends looking for quinoa products that are specifically labeled “gluten-free.” This is to ensure that products were handled in a way that prevented cross-contamination by other gluten-containing grains, either in the field or during the transport, milling, or packaging processes. Quinoa also makes a good wheat substitute for people with wheat allergies, as noted by Food Allergy Research & Education.

After quinoa is harvested, it undergoes processing to remove a natural compound called saponins, a bitter-tasting chemical that coats the exterior and acts as a natural pesticide. Some quinoa brands advise rinsing before cooking to remove any remaining saponins.

It’s also worth noting that quinoa is a food recommended for managing irritable bowel syndrome (IBS), as part of the low-FODMAP diet, which is used to identify carbs that can cause digestive issues like bloating. Finally, while quinoa allergies are rare, it is possible to be allergic to this plant-based food.

How to cook quinoa

The simplest way to prepare dry quinoa is to follow the directions on the bag or box. Unlike dry beans, quinoa does not require soaking, so it’s easy to make. Here’s how to do it:

You can also prepare quinoa in a rice cooker or slow cooker. And if you’re pressed for time, you can buy pre-cooked quinoa in the frozen section of most markets. Just thaw and enjoy.

How much quinoa should you eat?

There’s no one right answer to how often you should eat quinoa, or how much. The 2020 Dietary Guidelines for Americans advises choosing whole grains (as opposed to refined) for at least half of the total grains you consume. But, the best advice is to mix up the type of whole grains you eat in order to take in a broader spectrum of nutrients. As for what counts as a serving, for whole grains, it’s one-half cup cooked.

How to add quinoa to your diet

Quinoa is incredibly versatile from a culinary perspective. It can be eaten hot or chilled, in both sweet and savory dishes, and at nearly every eating occasion. The options are practically endless. At breakfast, blend quinoa into smoothies, used it in place of oats as a breakfast porridge, or incorporate cooked quinoa or quinoa flour into pancakes. You can also layer cooked, chilled quinoa with plant-based yogurt, fruit, and nuts in a parfait, or added it to a veggie-and-chickpea scramble.

Savory ways to incorporate quinoa into lunch and dinner meals include adding it to salads, grain bowls, soups and stews, casseroles, or stir-fries. Try it in cooked stuffed peppers, with veggies as a side dish, or in homemade plant-based burgers. Quinoa can also be transformed into desserts and sweet treats, including quinoa pudding, dark chocolate quinoa truffles, energy balls, and bars. Whole quinoa or quinoa flour can be included in baked goods, from cookies to muffins, brownies, and cakes.

Now that you know about quinoa’s nutrition, here’s what to know about plant-based protein and how to add it to your diet.

Things You Need To Know About Online Grocery Services

Everything That You Need To Know For Dating A Cam Girl

Everything Women Need to Know Before Starting a Weight Loss Plan