What Are Endocrine Disruptors? How These Chemicals Affect the Body 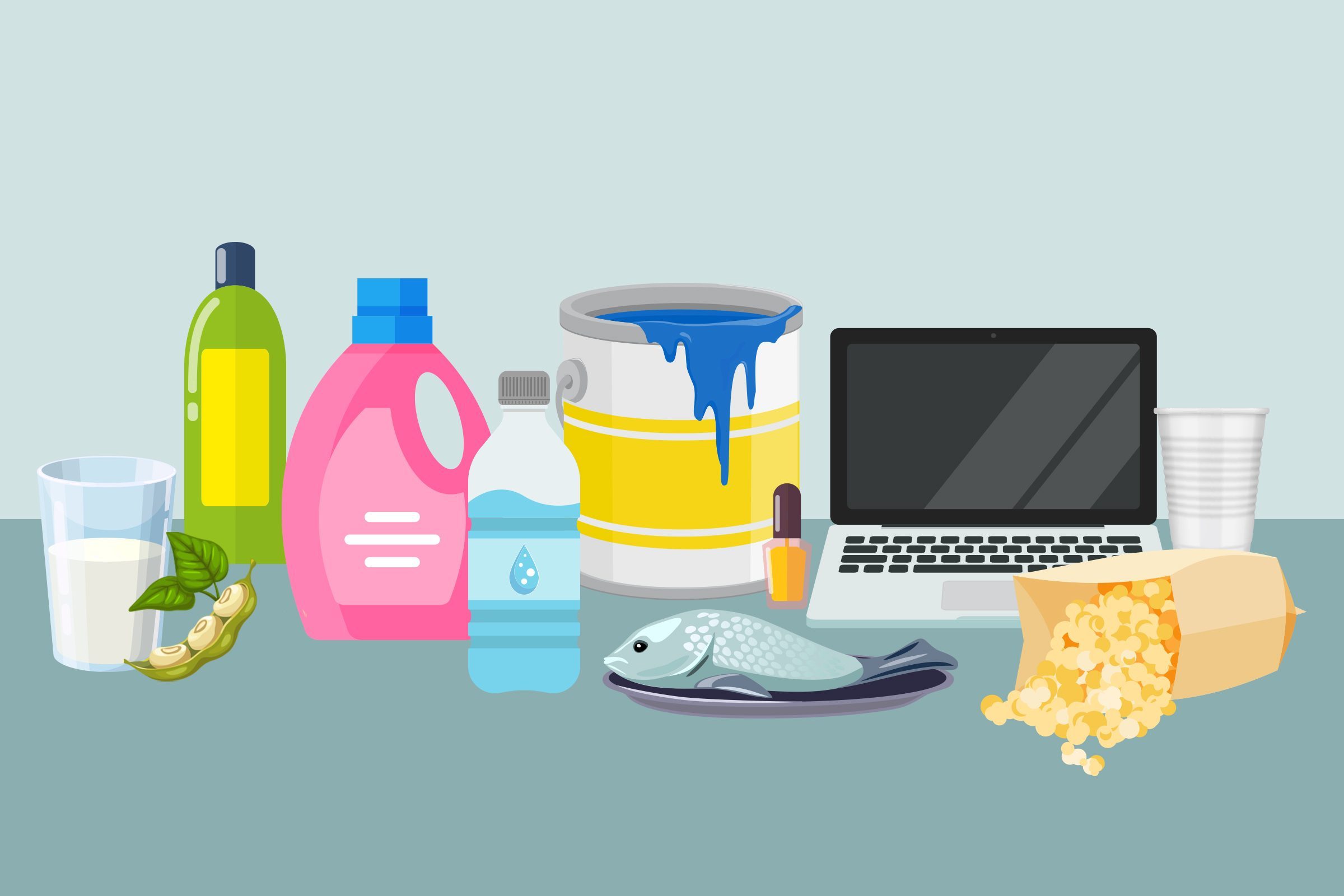 Here’s what you need to know about endocrine disrupting chemicals, where they are found, and how to avoid them.

You may have heard the term ‘endocrine disruptor’ and wondered how concerned you need to be about these chemicals, which can be found in plastics, packaging, food, household products, and many other places.

The definition of an endocrine disruptor is any chemical or compound, either natural or man-made, that either mimics or interfere with hormones in the body.

As you may know, hormones are pretty important and act as the body’s chemical messengers to control nearly all processes, explains Linda Kahn, an assistant professor in the Department of Pediatrics at the NYU Grossman School of Medicine.

The endocrine system includes hormone-producing glands like the ovaries, testes, thyroid, pancreas, and the pituitary gland in the brain.

Since that system regulates everything from metabolism to mood, avoiding things that may disrupt the balance makes sense. In fact, endocrine disruptors have been linked to a number of health issues. (More on this later.)

(Related: How Everyday Products Can Affect Your Fertility)

How do endocrine disruptors affect the body?

There are a few ways that chemicals and other substances can disrupt the balance or normal function of the endocrine system and throw your body out of whack.

EDCs essentially work by fooling the body into thinking that they’re hormones, according to Heather Patisaul, an assistant professor of biology at North Carolina State University who specializes in neuroendocrinology and endocrine-disruption research.

Some of them act as hormone mimics, sending false messages, explains Kahn. Others block hormone receptors on cell surfaces, meaning they block messages from getting through.

Endocrine disruptors could affect the actual levels of hormones in the blood by affecting or interfering with how they are made, broken down, or stored. They may even make the body more or less sensitive to certain hormones.

The body makes a lot of hormones, like estrogen, testosterone, insulin, or oxytocin, but most EDCs focus on disrupting estrogen, androgen (testosterone), and thyroid hormone function, Patisaul says.

“There are likely many other means by which endocrine disruption occurs that we have not yet identified,” Kahn says.

About 1000 chemicals meet the criteria for an endocrine disruptor, according to a report in Reproductive Toxicology.

So it’s not shocking that they are in many everyday products, like some plastic bottles and containers, detergents, food, cosmetics, lubricants, and pesticides, according to the Canadian Centre for Occupational Health and Safety. They are also in building materials, paint, clothing and upholstery, and thermal paper.

These could lead to contamination, and endocrine-disrupting chemical exposure, via your diet, the air, your skin, and drinking water.

Again, they are found in many everyday products—although the levels may not necessarily be high enough to cause a problem. Some of these occur naturally while others are manufactured, and some are now regulated in Canada, while others are not.

Here’s a list of the most common types of disruptors:

Used in the manufacturing of detergents, cleaners, and other products. Found throughout indoor and outdoor environments, too.

Found in fish and shellfish. Inorganic forms of arsenic were previously in pesticides, paint, and wood preservatives. The use today is restricted.

Found in some rigid plastics, and food storage or packaging materials. Many manufacturers are phasing out BPA and replacing it with chemical cousins BPS or BPF (bisphenol S and F).

Forms naturally in the atmosphere, occurs naturally in nitrate deposits and potash ore, and found in rocket propellant, explosives, fireworks, and road flares.

Found in several different types of food such as soy products, grains, beans, and some fruits and vegetables. (Here’s what experts say about whether soy is bad or good for you.)

Found in furniture foam padding, wire insulation, rugs, draperies, upholstery, plastic cabinets for televisions, personal computers, and small appliances. It could get into the air, water, or soil and contaminate food.

Found in some antibacterial soaps and body washes, toothpastes, some cosmetics, clothing, kitchenware, furniture, and toys. The FDA banned the chemical’s use in antibacterial liquid soaps in 2016. They also banned over-the-counter consumer antiseptic wash products containing triclosan, too. Many manufacturers are eliminating it from their products.

(Related: Eat This Sea Vegetable Every Day—It’s Good for Your Thyroid)

What happens after endocrine disruptor exposure?

Attention-deficit/hyperactivity disorder (ADHD) is a condition that can result in hyperactivity and/or attention problems. Research in JAMA Network Open looked at the association between endocrine-disrupting chemical exposure in adolescents and ADHD.

The study, which was published in 2020, included 205 teens, about 19 percent who had an ADHD diagnosis. The researchers measured endocrine disruptor exposure by testing urine samples, and found that for each 2-fold increase in phthalates, there was a 34 percent increase in the risk of ADHD-related behavioral problems. The link was stronger in males than females.

Another 2020 study in Environmental Health Perspectives looked at phthalate exposure before birth and found more autism traits in boys (but not girls) later on. The researchers found that greater concentrations of phthalate chemicals in a mother’s first-trimester urine samples correlated with increases in Social Responsiveness Scale-2 (SRS-2) scores, a measure of autism traits, at ages 3 and 4. However, they only saw the link in children whose mothers took less than the recommended daily folic acid dose (400 micrograms) during their first trimester.

Folic acid, a man-made form of the B vitamin folate, can reduce the risk of birth defects if taken before and during pregnancy. The study suggests it might also protect against endocrine disrupters, the authors concluded, although more research is needed. The CDC recommends all women of childbearing age get 400 micrograms (micrograms) of folic acid daily, along with food with folate from a varied diet.

A subset of EDCs, obesogens, promotes obesity, according to a 2019 report in Frontiers in Endocrinology. EDCs might also increase the risk of non-alcoholic fatty liver disease (NAFLD) by directly or indirectly interfering with liver’s ability to process fat. NAFLD is a type of liver damage similar to that seen with alcohol abuse, however, it’s due to fat accumulation in the liver and seen in people who drink little or no alcohol.

Long-term exposure to arsenic, one type of endocrine disruptor, can disrupt metabolism, and increase the risk of diabetes and other metabolic disorders, too, according to the NIEHS.

A 2013 review in Endocrine Connections looked at the research on human infertility and exposure to endocrine disruptors. The review found that not only may this exposure affect sperm quality in men, but female fertility, too. It all depends on the specific EDC.

For example, the report highlighted a higher risk of infertility in women with higher concentrations of BPA in their system. And exposure to pesticides and plastics in a work environment is also a known risk factor for female infertility, too, per the report. Because of this, BPA has been eliminated from many types of plastic and products for children, and BPA-free cans are now an option.

Although more research on humans is necessary, additional research in animals also found an association between adult exposure to EDCs such as pesticides and triclosan and harmful effects on adult female reproduction, according to a 2017 report in the Journal of Endocrinology.

(Related: 50 Facts That Will Make You Stop Using Plastic)

A study in Environmental Research on phthalates and disease looked at 1,504 Australian men between the ages of 39 and 84. They found phthalates in 99.6 percent of urine samples.

Those men with a higher phthalate concentrations had a greater risk of cardiovascular disease, type 2 diabetes, hypertension, and chronic low-grade inflammation than those with lower levels. (There was no link to asthma or depression.)

What is unknown about endocrine disruptors

Patisaul says there is so much that is still not known about EDCs. “We don’t know how many there are, or where they are, or how many are in our bodies at one time, although estimates are in the hundreds,” she says.

Patisaul adds more research is still necessary to understand how EDCs may affect the function of hormones other than estrogen, androgen, and thyroid hormone. “My lab has done some work on oxytocin and vasopressin, for example, while others are looking at insulin, but very little work has been done regarding their potential effects on the hormones involved in bone endocrinology, or appetite for example,” she says.

Kahn adds that more research is also necessary on whether endocrine disruptor exposure is equally dangerous throughout life, or during specific times only. “For example, studies have shown that exposure in utero, can affect health during throughout life, as all of the systems that regulate bodily processes are ‘wired’ during this time,” Kahn says. “We might also ask, is exposure to chemicals that interfere with sex hormones particularly dangerous during puberty?”

(Related: The Honest, Expert-Backed Truth About Having Sex While on Your Period)

Who is most at risk?

Patisaul notes that hormones are essential for proper development of nearly every organ system in the body, so exposure during fetal development is especially risky. So pregnant women should be extra careful to try to avoid them if they can.

Kahn agrees, adding that recent studies also suggest that endocrine disruptors may affect gametes (sperm and eggs), so people planning a pregnancy might also want to try to avoid exposure as well. “Young children should also be protected as much as possible, because we know that the brain continues to develop rapidly in the first few years of life,” Kahn notes.

Puberty is also a vulnerable time, but far less research exists examining this “critical period,” according to Patisaul. “We have almost no information about how EDCs may affect the aging brain, or women undergoing menopause, or EDC impacts in other significant life stages and transitions,” she says.

(Related: The 8 Worst Foods for Your Brain)

How to avoid endocrine disruptors

Since they are pretty much everywhere, it can be hard to avoid EDCs completely. “Unfortunately, we don’t have control over everything we’re exposed to, but among the things we can control, diet and personal and home care products are major potential sources of exposure to endocrine disruptors,” Kahn says.

Avoiding fragrance is one of the easiest ways to avoid endocrine disruptors, according to Patisaul. “Fragrance mixtures often contain a number of EDCs and allergens,” she says.

Here are some other tips from Kahn and Patisaul on how to avoid endocrine disruptors:

Consider downloading apps such as EWG’s “Healthy Living” or similar to help you navigate shopping for personal care products, Patisaul suggests. “Shoppers can also use the Mind the Store Retailer Report Card to shop at places that have made considerable efforts to reduce the presence of toxic chemicals in their full line of products,” she says.

Next: The Best Way to Switch Birth Control Pills

The Benefits of Body Oils

Sweat It Out and Level Up with These 7 Fitness Applications

10 Women Hairstyles That Are Trending These Days