Is It Bad to Eat Before Bed? 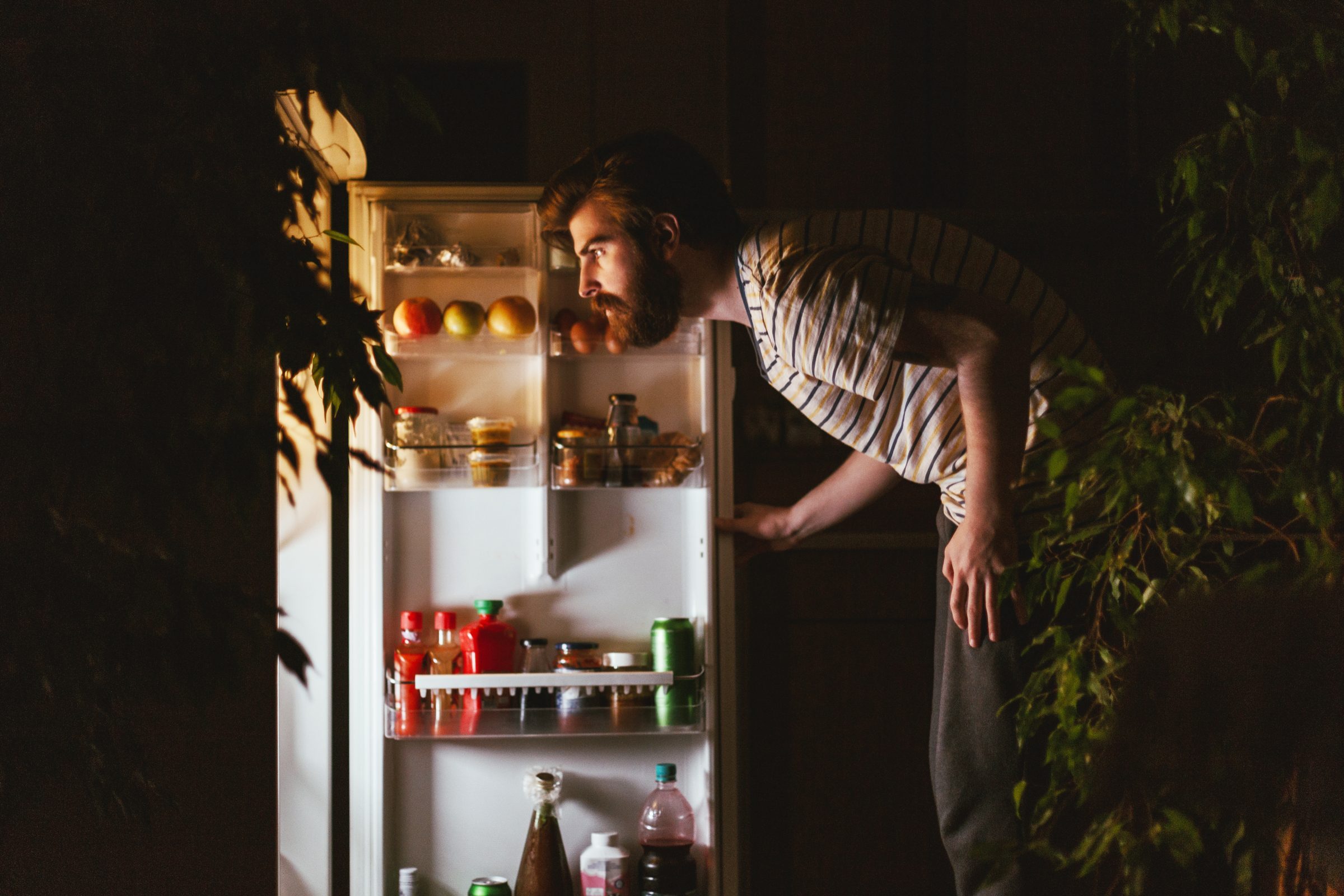 Is that nighttime snack a good idea or not? Here’s what nutrition experts have to say about whether or not it’s bad to eat before bed.

When it comes to big nutrition questions, here’s one there’s a lot of debate about: Is it OK to eat late at night?

Registered dietitian Mandy Enright, author of 30-Minute Weight Loss Cookbook, says there is a lot of incorrect information in the media about when to eat, particularly around meal timing. The impact of late-night meals may depend on a variety of factors. “The truth is what and how much you eat is just as—and often more—important than when you eat,” she says.

To clarify this bewildering topic, we chatted with several registered dietitian nutritionists to get their take. Here’s what you need to know about eating before bed.

A risk of packing on the pounds is usually the main reason people think it’s bad to eat late at night, says Jennifer Fiske, a registered dietitian nutritionist in Dallas, Texas. “The most-cited reason I hear is weight gain,” she says. “Eating late is often associated with lack of self-control and eating ‘junk’ food.” Images of people watching TV while eating chips and ice cream accompany catchy headlines and stick in people’s minds. However, it’s not that simple. “Many of my clients don’t look beyond the headlines to analyze what is true or false. They simply take, ‘don’t eat late or else’ at face value.”

Other dietitians say clients think increased cholesterol and even poor insulin control are automatic side effects of late-night eating. “It’s as if somehow the weight-gain fairy visits us after 6:00 p.m. at night, waves her wand, and poof!” says Amanda Liptak, a registered dietitian nutritionist and mindset coach in Cleveland, Ohio.

Have beliefs about nighttime eating changed over time?

Until recently, many people—experts included—thought weight management was as simple as calories in, calories out. But that thinking has evolved as more and more evidence surfaces about the effects of hormones, stress, genetics, and more on weight.

“A new research term known as chrono-nutrition has emerged over the past five years, and it takes a look at how the timing of meals impacts weight, blood pressure, blood sugar, and cholesterol,” says registered dietitian Lisa Andrews, MEd, owner of Sound Bites Nutrition in Cincinnati, Ohio. “Now, the thought is that manipulating the time of day that food is consumed may impact blood sugar, as well as body weight,” Andrews says. “Limiting the time of day when food is available may offset metabolic consequences of chronic disease.”

Friske adds that intermittent fasting and eating windows is more popular. Note that much of this research is still preliminary.

(Related: These Are the Healthy Fats You Should Definitely Be Eating)

What does the research say?

Eating before bed may be perfectly fine—and even a good idea for some people—but it also depends on your daytime eating habits, what you are eating, and your own personal calorie needs.

Fiske puts it best: “As with many aspects of nutrition, I see research that supports multiple conclusions about eating before bed.” This is why the question, “Is eating before bed bad?” is so confusing. One thought is that while nighttime eating won’t necessarily lead to weight gain, the effect on weight depends on the distribution of the rest of your daily calories. This means that if you “saved” 200 calories for a nighttime snack, all might be good. But if you’re eating an extra 200 calories night after night, that could, over time, add up to rather significant weight gain. Plus, some research suggests that eating at night may make it less likely that you eat breakfast—and skipping breakfast may lead to becoming overly hungry and overeating later in the day.

In research in the Journal of Obesity, almost 20,000 Japanese women who ate late dinners or bedtime snacks were more likely to skip breakfast. “Having a late dinner or bedtime snack was associated with a higher probability of having overweight or obesity,” says Enright.

Research also connects sugary nighttime eating with an increased risk of dental cavities. This is really no surprise, as advice has long been not to give infants juice at bedtime for a similar risk, or let them sleep with a bottle in their mouth. A small 2017 study in Community Dental Health on 128 preteen girls who ate sugar snacks before bed found they had an increased risk of dental cavities.

What has changed: how we look at nighttime eating for athletes. “They have increased nutrition needs, so eating before bed can support recovery and ensure adequate intake,” says Fiske. “This concept has been well-known in the sports nutrition field for quite a while. However, it’s gained mainstream popularity in recent years.” This is particularly the case if someone has finished an intense workout in the evening.

(Related: How the Pandemic Helped Me Embrace Weight Gain and Intuitive Eating)

Is there a definitive answer?

There continues to be—and probably always will be—chatter about plusses and minuses about eating before bed. If you want to enjoy more of your total daily calories during the day, then perhaps skip a nighttime snack. However, if you really enjoy the routine of having a small snack after watching your nightly TV episode, you can also make that work. Just make sure you’re mindful about eating at night—meaning you aren’t multitasking while eating, and you’re aware of if you’re truly hungry or just feel like snacking.

If you’re not actually hungry, you may want to reach for something lighter, but that still provides the texture you’re craving—for instance, baby carrots can be satisfying if you’re craving something crunchy. Typically, people want to enjoy their evenings and rest, says Liptak. “This is where things start to unravel, and people generally become less in tune with their hunger cues,” Liptak says. “This makes eating a bag of chips in front of the television or drinking a glass of wine around the fire pit a good way to pass the time, even when your body has said ‘enough!’”

(Related: Here’s Why Drinking Alcohol Can Make You Hungry)

Who benefits the most from nighttime snacks?

Also, some people actually do need a nighttime snack. “Often there are clear indications that someone may benefit from a nighttime snack,” explains Liptak. “People with diabetes, people with low blood sugar, or people who find themselves waking up in the middle of the night from spikes in cortisol often benefit greatly from an evening snack,” Liptak says. “The key is choosing a nutrient-dense snack intentionally for this purpose and making sure that it is rich in protein to help control blood sugar and provide satisfaction.”

Nursing moms may also benefit from a pre-bedtime snack. “Nursing requires extra energy, so keeping snacks handy is an asset,” says Fiske. If you do reach for a snack, don’t forget about the hormones melatonin and serotonin, which help support a good night’s sleep. “A small snack of a protein—such as milk, yogurt, chickpeas, or rolled-up turkey—combined with a carbohydrate such as fruit, whole-grain bread, or cereal can help bring on sleep hormones serotonin and melatonin to promote a more restful and deep sleep,” says Enright.

(Related: What Exactly Are Net Carbs? Here’s What You Need to Know)

Can eating before bed impact weight?

Researchers from Ulster University in Northern Ireland presented a study at the 2020 European and International Congress on Obesity. Their findings: Late-night eaters had lower-quality diets and weighed more than people who ate earlier. “Findings clearly showed that it was the quality of food choices that differed in people who ate earlier in the day, versus late at night,” says Liptak. “This emphasizes what we’ve known for some time—weight gain is influenced more by a person’s habits and lifestyle rather than by the timing of the meal.”

And as with weight management in general, mindful eating and paying attention to hunger cues is key all day long. “This means eating balanced meals throughout the day, not waiting too long to eat, and not saving calories for later if dining out,” says Liptak. “All these things prevent overeating at night by helping to regulate your blood sugar and control food cravings.”

(Related: 4 Ways to Prevent Overeating When You’re Working from Home)

Can eating before bed impact your sleep?

“Eating before bed can impact sleep if someone is eating very close to bedtime,” says Fiske. “I encourage clients to separate their last meal or snack and bedtime by about an hour to allow for digestion. Some people do not experience disturbed sleep from eating before bed, though, as this is very individual.”

Ultimately, research supports the fact that it’s what you eat before bed that really has the impact. “A diet low in fibre and high in sugar and fat before bed may result in worse sleep,” says Andrews. “A small study found that this type of dietary pattern was linked with less restorative sleep.”

As well, eating a late-night dinner may increase the likelihood of reflux, particularly for people with diabetes, according to research in the Canadian Journal of Diabetes. Having reflux can make it more difficult to get a good night’s sleep. So when should people stop eating in the evening? “I usually advise at least one hour between the last meal or snack and bedtime,” says Fiske.

If you are going to eat before bed, there are better-for-you foods to consider. Here are some ideas:

Next, check out this list of foods to never eat before bed.

The 8 Beauty Treatments to do Before Your Wedding Day

8 Best Places To Visit In Switzerland Before You Turn 30

Five Things to Consider Before Buying A Lace Front Wig