Benefits of Bee Pollen: What Experts Need You to Know 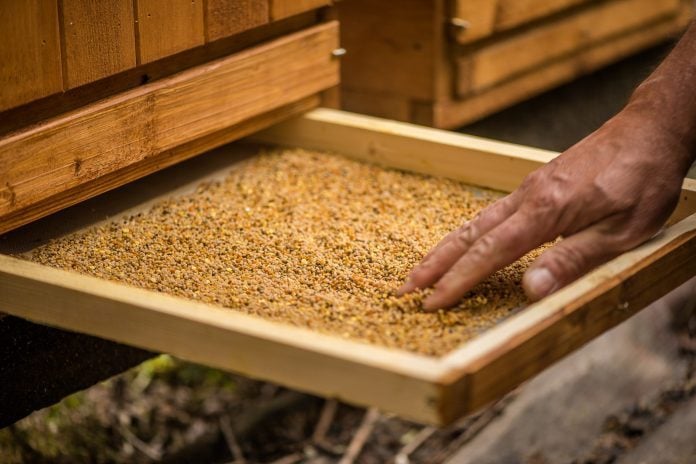 Bee pollen generates a lot of buzz for its reputed health benefits, from allergy relief to faster healing. But there are some notable caveats—learn what it can and can’t do.

Bees are a blessing. They play an important ecological role as pollinators, supporting many valuable farm and garden crops, as well as wild plants. And on top of helping us grow our food, some bees make enough food of their own to share, albeit not voluntarily.

Several bee species produce honey from nectar, the most common being the western honey bee, Apis mellifera. Honey is a sweet, spoil-resistant superfood with antibacterial and antifungal properties, plus household uses from body wash and moisturizer to cough suppressant and burn treatment.

Honey isn’t the only unique substance made by honey bees, though. They produce beeswax and propolis as building materials, along with royal jelly to feed their larvae and queens. They also pack pollen into little bundles known as bee pollen, which becomes a major food source for the hive.

All of these bee products are used by people to some degree. That includes bee pollen, which has become popular as a dietary supplement due to the belief that it offers wide-ranging health benefits. This belief is not universal, however, and some experts express caution about the claims of what bee pollen can do for the human body.

Here’s a closer look at what we do and don’t know about bee pollen.

(Related: 16 Superfood Powders to Add to Smoothies, Baking and More)

What is bee pollen, exactly?

As honey bees gather pollen from a flower, they mix it with saliva or nectar and pack it into “pollen baskets” on their hind legs. The resulting pellets of bee pollen are flown back to the hive, where foragers drop them off and flightless workers load them into honeycomb cells. They then undergo fermentation to create bee bread, the hive’s main source of protein.

Bee pollen can be harvested before that last step by outfitting the hive entrance with pollen traps, which collect pollen from the bees’ legs as they pass by. Although this pollen has been curated and packaged by bees, it’s still raw materials at this point, so it could contain pollen from many different plants. The contents of bee pollen are highly variable, depending on what plants are near that colony’s hive and which ones the bees happened to visit.

Since the contents of bee pollen are so variable, how can someone determine the right dosage? “You can’t,” says Heather Moday, MD, owner of the Moday Center in Philadelphia. “It’s completely unstandardized.”

Still, there are some broad patterns in the makeup of bee pollen. According to a 2015 study in Evidence-Based Complementary and Alternative Medicine, it’s about 23 percent protein on average, including about 10 percent essential amino acids, plus 30 percent digestible carbohydrates, 26 percent sugars, 5 percent fatty acids, and about 1 percent flavonoids, a group of plant nutrients associated with a variety of health benefits.

Wondering how bee pollen stacks up nutritionally? Take a look at the nutritional profile of 10 grams of Badia Spices’ bee pollen, along with the percent of your daily recommended value it accounts for:

(Related: Is Palm Oil Bad for You? What You Need to Know)

The health claims behind bee pollen

Based on what we know about the general makeup of bee pollen, there are reasons to at least be optimistic it can offer health benefits. “Bee pollens contain a substance called flavonoids, which are very important to human health,” Dr. Moday says. “We ingest many flavonoids from fruits and veggies, as well as tea and coffee. They are very health-promoting, as they have antioxidant, anti-inflammatory properties.”

It would make sense for bee pollen to provide “health-enhancing value,” wrote the authors of a 2016 study, given the wide range of specialized compounds known as secondary plant metabolites, which include vitamins like niacin, biotin, and folic acid. The study was published in the Journal of the Science of Food and Agriculture.

Still, the researchers added, the variable composition of bee pollen has made it difficult to study. “Although the bee‐pollen components have potential bioactive and therapeutic properties, extensive research is required before bee pollen can be used in therapy,” they wrote.

What the experts say

Fans of bee pollen often claim it has antioxidant, anti-inflammatory, antimicrobial, and immune-boosting properties. They also point to its ability to protect against various ailments, such as liver damage, heart disease, and tooth decay. It may be a nutritious food, but experts generally agree these reputed health benefits remain unproven in humans.

“There is no scientific evidence of the beneficial effect of ingesting bee pollen,” says Richard Wasserman, MD, medical director of pediatric allergy and immunology at Medical City Children’s Hospital in Dallas and managing partner of Allergy Partners of North Texas.

Here are a few of the common claims about bee pollen, a lot of which are based on animal studies. There is still insufficient data on humans to recommend bee pollen as a health aid for various conditions. However, some of the studies mentioned below provide possible clues to the potential effects of bee pollen on humans.

(Related: Is Eating Soy Good or Bad for You?)

Some people ingest bee pollen in hopes of conquering pollen allergies with desensitization. That may be possible, but it’s not as simple as it sounds. For one thing, it would need to include enough of the specific pollen to which you’re allergic, which is difficult to ensure given the variability of bee pollen. Using locally-sourced bee pollen might increase your chances of success, but it’s still a shot in the dark.

And many people suffer from allergies to pollen from grasses, which bees don’t pollinate, or are allergic to trees that rely on wind pollination rather than insects. Bees may still pick up some incidental amounts of tree or grass pollen, Dr. Moday says, but probably not enough to be significant.

“Allergy shots are way more effective and have been studied extensively for decades,” Dr. Moday says. “In this case, you are getting purified and standardized extracts of pollens that you know you are allergic to injected under the skin, which elicits a stronger immune response.”

Bee pollen is high in polyphenols, a family of organic compounds found in many plants that include the aforementioned flavonoids. Polyphenols are our main dietary source of antioxidants, compounds that help fend off cell damage caused by oxidation.

There may still be insufficient evidence of how bee pollen affects human health, but there are at least some possible clues from animal research. A study in the journal PLOS One, for example, found that bee pollen—along with honey, royal jelly, and propolis—reversed oxidative damage in catfish caused by pesticides. The researchers attributed this to the high polyphenol content of these bee products.

Overall, research into the antioxidant properties of bee pollen suggests a high degree of variability, according to a 2018 research review in Oxidative Medicine and Cellular Longevity, not just among different colonies and climates, but also depending on when and how the pollen is harvested. This makes it hard to draw any kind of conclusion about bee pollen’s antioxidant benefit.

Bee pollen is often touted for its broad anti-inflammatory properties, but again, the evidence is from animal studies. In a study on rats with swollen paws that was published in BMC Complementary Medicine and Therapies, researchers found that bee pollen “mildly reduced” the swelling, while an extract made from bee pollen “showed relatively strong inhibition of paw edema,” indicating a possible anti-inflammatory effect.

A 2020 study in Research in Pharmaceutical Sciences reached a similar conclusion. The findings revealed that bee pollen extract had a significant anti-inflammatory and anti-angiogenesis effect in rats, meaning it could inhibit tumor growth as well as inflammation. It’s important to note that all of these studies were conducted in rodents. Further research is needed to extrapolate the findings to humans.

Chestnut bee pollen may protect liver cells and reverse liver damage in rats, according to a study in Evidence-Based Complementary and Alternative Medicine. The study also noted it did so without the side effects of another antioxidant treatment. And a 2019 study in Nutrients suggests bee pollen collected from the flowers of China’s S. chinensis plant could inhibit liver disease in mice with obesity. These are promising results from animal studies, but more research will be needed to establish whether bee pollen can have similar effects in humans.

In a 2015 study in Molecular and Clinical Oncology, researchers asked 46 breast cancer patients to report the effect on their menopause symptoms while taking either bee pollen or honey. About 70 percent of both groups said they saw an improvement in symptoms. A few other small studies, like one published in Climacteric, have found similar results, with women reporting reduced symptoms of menopause when taking bee pollen.

These studies have several limitations, though. They typically include small numbers of participants, they’re based on self-reported data, and they don’t prove the bee pollen directly caused reduced symptoms. But since most information about bee pollen is currently based on animal or test-tube studies, these do stand out.

(Related: 5 Changes to Your Diet to Help Ease Perimenopause and Menopause Symptoms)

The anti-inflammatory, antioxidant, and antimicrobial properties of bee pollen could make it an effective treatment for burns and other wounds. A 2016 study on pigs, for example, found that an ointment made from bee pollen extract helped burn wounds similarly to silver sulfadiazine, and with fewer side effects. The study was published in Evidence-Based Complementary and Alternative Medicine.

Bee pollen is possibly safe for most people when taken by mouth for up to 30 days, according to the U.S. National Library of Medicine (NLM). The main danger is from allergic reactions, which bee pollen can trigger in people with pollen allergies. That said, very few people have died from anaphylaxis due to bee pollen ingestion, Dr. Wasserman says.

There could also be some risk from contaminants in bee pollen. In addition to the pollen itself, bee pollen may contain trace amounts of nectar, bee saliva, enzymes, honey, and wax, along with various contaminants from the foraging environment. It can carry fungi and bacteria, for example, although the total biomass of microbes tends to be low.

Another concern could be contamination by pesticides on the plants that bees pollinate. In a 2018 study of bee pollen samples, published in Science of The Total Environment, researchers found residues from 18 different pesticides, with at least one pesticide detected in 62 percent of samples.

Interactions between bee pollen and a blood-thinning medication are another worry. And the product may be unsafe during pregnancy and breastfeeding. The NLM advises against using bee pollen in either scenario.

Bee pollen appears to be relatively safe for most people. Most of the health claims surrounding bee pollen come from animal and cell studies, as human data is currently insufficient and limited. As a result, it’s too early to say whether bee pollen might have a beneficial effect on our health.

If you choose to take bee pollen, consult a health care professional regarding your reasoning for taking bee pollen to determine if that’s the best course of action for you.

Now that you know about the benefits of bee pollen, this is what you need to know about seed cycling and if it helps with PMS.

Reasons Why You Need Silk Pajama Sets In Your Life