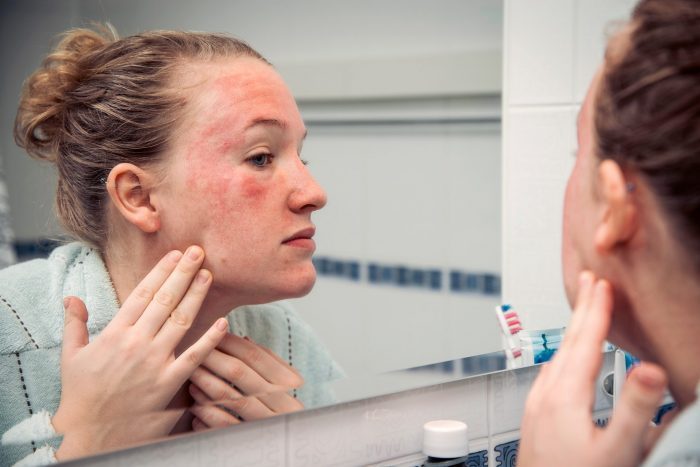 Hives can show up on various parts of your body, including your face. Check out how to identify the symptoms, triggers, and treatments—plus when to see a doctor.

Hives are annoying, itchy, and unsightly, but at least they tend to appear on areas of the body that can be hidden by clothing. But then there are face hives—they’re not more severe than hives elsewhere on the body, but they can be more embarrassing.

Hives go by the medical name urticaria. “Hives are a type of allergic reaction that causes your body to release histamine and manifests as itchy, red bumps or welts that can appear anywhere on the body,” says Peterson Pierre, a dermatologist in Westlake Village, California. They’re often pink, white, or flesh-coloured and turn up as itchy swellings. They may last for several hours before going away, but they can also reappear on a different part of the body.

Here’s everything you need to know about what causes hives on your face, how to treat them, and how to prevent new ones from occurring.

(Related: Does Sunlight Give You Hives? 5 Things to Know About Solar Urticaria)

What causes hives on the face?

No matter where they appear on the body, hives generally have a variety of causes. Everything from stress and sun exposure to extreme cold, friction, and an allergy can trigger this pesky reaction. Here are some top causes of hives on the face.

Been extra stressed recently? It’s possible that it has a connection to your hives flare-up. But it’s not necessarily the main cause. “We usually rule out these other causes first to make sure that we’re not missing something treatable or that the patient should be aware of,” says Papri Sarkar, MD, a board-certified dermatologist in Newton, Massachusetts. And while stress may play a role in your hives, that doesn’t mean it caused the reaction. It comes down to the tricky difference between correlation (two things being related) and causation (one thing causing another).

So it’s possible that stress causes hives. But it’s equally as likely stress just makes hives worse. What we do know, though, is that there’s a link. For instance, a 2018 study in Advances in Dermatology and Allergology found higher stress levels in women with chronic hives.

There’s an exception, says Dr. Sarkar, who references a rare condition called adrenergic urticaria. For people with this disease, emotional stress causes small, transient hives to appear. “Unfortunately, we don’t yet understand the mechanism of this,” she says. “Injecting stress hormones like epinephrine or norepinephrine in patients with stress-induced hives can reproduce the hives, though. In these patients, coffee or chocolate may also induce hives.”

Tempted to spend a beach day sunbathing? You know to apply sunscreen to your face, but if you’re prone to hives, make sure you bring an umbrella for shade too. Sun exposure and hives are linked, according to pediatric dermatologist Sheilagh Maguiness, MD, an associate professor in the Department of Dermatology at the University of Minnesota Medical School. “Solar urticaria is an uncommon form of hives. It refers to hives occurring minutes after sun exposure,” says Dr. Maguiness, who is also co-founder of Stryke Club skin care line for teen boys.

Scientists still aren’t sure why this form of physical urticaria affects certain people but not others. What they do know is that the trigger isn’t simply the sun’s heat. It’s true that heat can cause hives, but for people with solar urticaria, it’s the sunlight that causes a reaction, says Dr. Sarkar. “In patients with solar urticaria, sunlight causes histamine to be released from certain cells—mast cells—which triggers hives,” she says. “Protecting the skin from the sunlight using UPF clothing, seeking shade, wearing sunscreen can all help.”

Patients are often put on antihistamines to block the release of histamine as a fix. And lest you think a blip of time spent in the sun won’t make a difference, think again. Dr. Pierre says that exposure to just a few minutes of sunlight may cause hives.

(Related: 8 Simple Tricks to Better Protect Yourself From the Sun)

Autoimmune diseases such as Hashimoto’s disease and lupus can be tricky to diagnose and may lead to a host of frustrating symptoms—weight gain, weight loss, extreme tiredness, muscle aches, and more. While there’s much about autoimmune diseases that remains unknown, Dr. Maguiness says that there’s a correlation between them and hives outbreaks.

“Hives can be a manifestation of an underlying autoimmune disease,” she says. “The one most commonly reported in association with hives is autoimmune thyroid disease. This might be due to the association with anti-IgE (immunoglobulin E) or IgE receptor antibodies. People that have anti-IgE antibodies are more likely to have chronic autoimmune urticaria.”

Certain autoimmune diseases, such as lupus, thyroid disease, and rheumatoid arthritis, produce autoantibodies that can react with an antibody that may cause hives, says Dr. Sarkar. These diseases generally tend to cause chronic hives. “Each individual lesion may still last 24 hours, but the crops of hives will last more than six weeks total,” she says. If you have chronic hives, your doctor will look for autoimmune diseases. “Treating the underlying disease often improves the hives,” Dr. Sarkar says.

“In many cases, especially in children, hives are seen following an infection,” says Dr. Maguiness. According to the American College of Allergy, Asthma, and Immunology, infections may be bacterial in nature, as they are with strep throat and urinary tract infections (UTIs), or viral, like a cold, hepatitis, and mononucleosis.

Shuffling between extreme heat and extreme cold—say, walking from a building blasting heat to the freezing outdoors—can trigger hives in people with cold urticaria. With this form of the condition, it’s the quick drop in temperature that causes the outbreak, says Dr. Pierre. It can happen if you go from sweltering on the beach during a hot summer day to plunging into cool ocean water. “Similarly, a rise in temperature, as seen during exercise, can cause exercise-induced urticaria,” says Dr. Pierre.

Hives are frequently caused by friction or rubbing against something, but they can also occur thanks to virtually invisible triggers. “If you have hives in reaction to a certain trigger in the air—like pollen, cat dander, et cetera—it’s more likely to appear where you actually had the contact,” explains Dr. Sarkar. “Most often, that’s the face, neck, and extremities since those tend to be the areas that are most often exposed.” Hives could also be caused by bug bites, a hypersensitivity known as papular urticaria.

The list of potential causes for hives on the face and body is numerous. “Hives are really common, and there are many possible causes or triggers,” says Dr. Sarkar. Additional reasons you might have hives include:

How long do hives last?

Individual hives don’t stick around for long. “Each individual lesion generally lasts less than 24 hours,” says Dr. Sarkar says. But don’t get too excited. While an individual hive may be there and gone in a day, the reaction in general doesn’t usually end quite so quickly. Hives can disappear from one area and reappear elsewhere.

Overall, hives can last days to weeks, she says. In some cases, the hives last for longer than six weeks; these are considered chronic. In these instances, Dr. Sarkar says, searching for an underlying disease is a must. Doctors will do a workup, checking for allergies and autoimmune disorders, among other potential causes.

Is there treatment for hives?

Most hives will go away on their own, especially with lifestyle management. However, if you’re suffering from chronic hives, known as chronic urticaria, you’ll probably want to find treatment. “The two mainstays of treatment involve identifying and removing the offending agent and the use of antihistamines such as Allegra, Zyrtec, and Claritin, to name a few,” says Dr. Pierre.

If those don’t help, your doctor may turn to newer biologic therapies, such as omalizumab, says Dr. Maguiness.

Dr. Sarkar carefully emphasizes that the treatment for hives depends on the individual cause. “If it’s an allergic reaction, usually antihistamines and avoiding the allergen help. If it’s due to stress, taking a medication that helps to mediate the stress response [and avoiding stress] can help. If it’s an autoimmune disease, we usually treat the root cause,” she explains. She stresses the importance of getting to the bottom of your chronic hives. Without understanding the cause, it’s hard to settle on a good solution. “There are so many causes of hives that it’s almost impossible to give one treatment regimen for all of them,” she says.

When you should seek medical attention

In rare cases, hives can become dangerous and require immediate medical attention. “Sometimes the swelling that we see in the skin in discrete plaques can be present in the oral or respiratory system as well,” says Dr. Sarkar. “If that happens, patients may develop respiratory problems and progress to being unable to breathe. This is a medical emergency and needs to be treated right away.”

An early symptom to look out for is an itchy or swollen tongue or lips. “At the first sign of that, I recommend patients call 911,” she says. And get medical help if you’re having a hard time breathing or swallowing, or if your tongue feels larger.

Next: What Causes Hives? Everything You Need to Know About Urticaria

Things You Might Not Know About Your Medicare Coverage

What Are Chin Fillers? Why Should I Choose Them?

What are Age Spots and How to Remove Them?